Among the most unusual exhibits of the small Musée gaumais is certainly the “Matrjoscha” Mother Mary. It is a wooden statue from the 18th century, originally from the church of Sainte-Marie. As the Queen of the Universe, Mary stands on a crescent moon. The statue has a cavity on the back of the Madonna that was closed with a wooden lid. For many years, nobody knew about this secret interior, because the statue had been painted white. All the greater was the surprise when an antique dealer from Eindhoven in the Netherlands, to whom the sculpture had come to by some detours, recognized it while cleaning. In the interior was another wooden statue depicting a seated Mary with the Christ Child (as embodied wisdom) in her lap. This second sculpture dates back to the 13th century and was probably located earlier in the village of Sainte-Marie, where it was worshiped. But how had a statue of the 13th century got into the interior of a 18th century statue? Did the inhabitants of Sainte-Marie cling on to their Madonna to such an extent that they did not have the heart to destroy her? This was customary in profanations when a sacral object was no longer needed. No matter the circumstances, the double Madonna from Etalle stimulates the imagination of every observer.

Another extremely rare object of the Musée Gaumais is the Gallo-Roman relief stone, which shows the front part of a Gallic mower. The teeth of this contraption plucked the ears and threw them into the back of the machine. Throughout this process, the chaff remained lying on the ground. The stone was found in Montauban in 1958. The exhibit was declared one of the treasures of Wallonie in 2010. It is displayed in the museum’s new building, which opened in 1992. The charm of a bygone era can be found in the Musée Gaumais’ folklore collection housed in a former Franciscan monastery. This part of the museum invites the visitor to dive into a kitchen, a living / bedroom, called belle-chambre and the curiosity cabinet of a local savant. The clothes of the mannequins suggest that most of the exhibits are pre-World War I objects.The answer to the question of whether the women’s underwear hanging on the bedroom closet is still politically correct in 2017 is up to the viewer. Not known to many visitors is the Battle of the Frontiers at Longwy, which took place 22 to 25 of August 1914 on the line Montmédy-Longuyon-Longwy. With an exhibition that includes a single room, the Musée Gaumais commemorates the dead of the struggle for Virton. The exhibits are mainly military devotional objects that have been transferred to the museum by private collectors. The presentation does not inform the visitor much about the circumstances surrounding the actual battle and its impact on the course of the war. However, it does illustrate the significance of the casualties for the collective memory of the inhabitants of the Gaume. 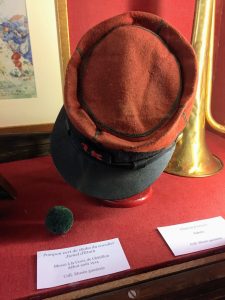 In my personal opinion, the musée Gaumais in Virton is definitely worth a visit.